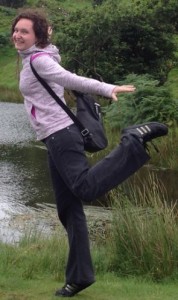 I was born and raised in Germany and since 2008, I’ve been happy to call Perth my home.

Only when you start moving can you find out what works for you and what is fun for you!

Staying physically fit all your life is a key aspect of staying healthy: You rest, you rust!

Life is not something that happens to you, but something you create. It is up to you what you make of whatever it is that crosses your path.

Fitness can be anything that involves moving, whether it’s weight training, walking, jogging, skipping, boxing, yoga, martial arts, swimming, dancing, or team sports. The most important thing is that it’s fun!

My Personal Story to Fitness & Wellness

How I Learned To Listen To My Body

My story to becoming a personal trainer evolved from a time when I was barely able to move. I’d spent my childhood bouncing from gymnastics to dancing to karate but as a teenager my body literally gave up on me. My knees became weaker and hurt so much that I could hardly walk. My back was in constant pain, too. At the age of 14, I had to stop all activity for several months . There was no explanation for it. The doctors couldn’t find a diagnosis so I was just advised to rest. I became depressed and began to lose motivation. It was a very unhappy time.

While resting, I started gaining weight, which affected my self esteem and confidence a great deal. Despite feeling down, I asked my mum to let me go with her to the gym, thinking that maybe doing some exercise on machines would be manageable and safe.
Thankfully, my body responded well and I got into a regular routine of simple exercises. My muscles became stronger and started to build, but I wasn’t losing the fat as I’d hoped and I became bigger and bigger. Not the most desirable situation as a 14 year old girl.
For years to come I wasn’t able to shift the weight I had put on, but I kept going to the gym mainly focusing on cardio using the spin bikes and elliptical trainers because that was less impact on my joints. However, eating had become a bit of a life line for me, hence with this combination I managed to not put on more weight, but also didn’t loose any.
After High School I decided to take a gap year which took me to Australia. Having only little money left me walking everywhere, with my backpack most days, and I felt a freedom I had never felt before. I was happy, ate less, and lost some weight. And neither my back nor my knees were giving me any grief…I figured out over time that my symptoms had their roots in emotional causes from things that had happened in my childhood. My body taught me that our emotions and our physical well-being are very much so intertwined.
Anyhow, the idea to make Australia home one day deepened throughout the year. But I had made commitments before I left, so I had to go back to Germany first.
When I got back to Germany, I was determined to keep the weight off. So I went straight back to the gym, and started using the treadmill more. It was then, a friend asked me if I’d join her for a jog, outside. I reluctantly agreed, still being afraid that the impact from running on a hard surface would not be good for my knees. So I tackled this by doing some very short intervals and stop if it was too much. Amazingly, my knees were fine. No pain. No problems at all!
From that day on my workouts consisted mainly of improving my ability to jog and run, mixed in with some weight training. I also paid lots of attention to how my body felt after certain movements, and how to move it differently to make it feel different! Obviously the knees weren’t a hundred percent, and I did have set backs as well, but never that bad that I couldn’t walk or had to take pain killers.

Whilst studying animal naturopathy in Germany (Since I was a kid I wanted to help and work with animals, but conventional medicine did not appeal to me.), I started looking into how I could possibly immigrate to Australia. Luckily, alternative medicines, which I had a lot of interest in, was a possibility to do so. The Australian Institute of Holistic Medicine in Perth offered an Advanced Diploma Course in human Naturopathy for international students. I applied and at the age of 23, I waved goodbye to Germany and headed to Australia to start a 3 year full time studies. After receiving my Diploma, I studied for another year to earn my Bachelor of Health Science in Complementary Medicine.
My studies gave me a huge amount of knowledge as well as being part of my own journey of self discovery, personal development, health and wellness. Above everything, the feeling that I have had for a long time, that we have to look at ourselves as an interconnected whole being, rather than separate parts and systems, was deepened immensely during this time.
After graduating, I started to take on clients as a certified Naturopath. With every person I would talk about lifestyle changes, as well as nutrition and herbs to help with the physical and mental well-being. Exercise was always a recommendation, but I hadn’t studied enough about movement to be specific. I wanted to take this side of my offering further, and be able to give people a better idea of how to exercise and where to get started. So I embarked on more training – and got my Cert III and IV in Personal Training in 2012.
During that stage of my studies, I realized that being physically active suited me much better than sitting in a clinic all day long. Also, the idea that supplements are the key to health didn’t sit with me very well. They are just tools to help. The real key to health and well-being is within ourselves. I felt that through movement and working with people physically helped them a lot more.

I now work with people from all walks of life, helping them to find movement and freedom in their bodies, while meeting personal goals like weight loss, toning, being pain free, and most importantly all round wellbeing and positivity. Much of my work is informed by a theory called Anatomy Trains, which is based on the principle that our bodies are designed to flow, and are connected from head to toe. This theory brings so much of my previous studies together, and my services are now a fully integrated offering that can truly change lives. Exciting stuff!