Ham stuffed with Apricot and Citrus 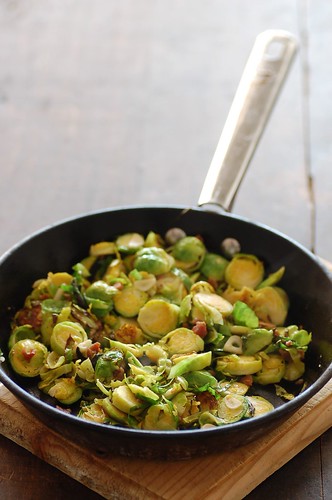 While it makes an excellent lunch combined with a poached egg,
you could just as easily serve it as a side dish alongside roast meat, poultry or even a meaty fish like swordfish.

Trim the base of your sprouts and peel away the dark green outer leaves. You can either discard these or add them into the pan but they
will add a stronger more cabbage flavor, so probably best to omit them on your first attempt. Take the trimmed sprouts and finely slice lengthwise into 4 or 5 slices.

Heat a small frying pan over a medium heat. Add oil and allow to warm for a few seconds before adding the pancetta.
Cook for a minute or two and then add the trimmed sprouts, sage and garlic. Saute, stirring regularly for approx 10mins
or until the sprouts are starting to soften and take on a golden color. Season well and pile onto a plate.
Squeeze over lemon juice to taste (and serve topped with a poached egg.)

Gratin of Pumpkin, Leek and Apple

Preheat the oven to 300 degrees (the rack should be in the middle of the oven). And either lightly coat a cookie pan with coconut oil or butter or cover with parchment paper.Lightly beat the egg white with a whisk (just until a bit foamy). Add the cinnamon, vanilla, salt and sugar. Stir in the walnuts, coat the walnuts well.Remove the walnuts with a slotted spoon (allowing extra coating to drip out), and place on the cookie sheet. Spread out on the cookie sheet so that the nuts aren’t touching for the most part. Place in the oven for 25 minutes.Remove from the oven and cool for 20 minutes. Serve or store in an airtight container for up to two weeks.Serves depends 😉